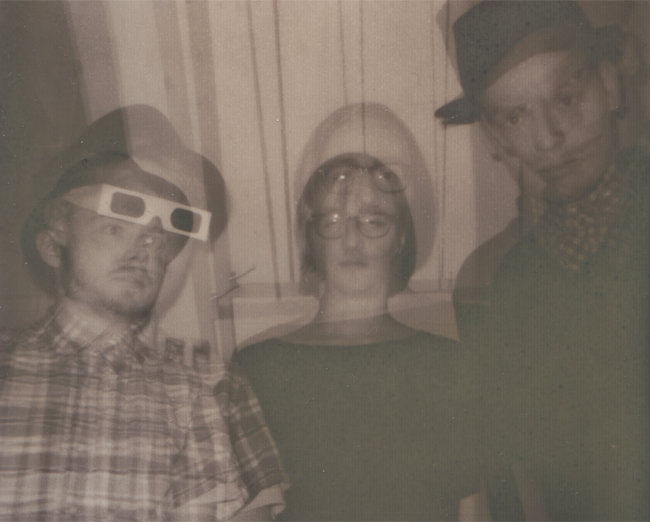 Terminal Escape
There are good tapes. There are tapes that stick with you and maintain your attention long after they have been filed away in some box or upon a shelf. There are some tapes that sit in the “new arrivals” pile for ages, simply because every time you listen to them you hear something new. And then there are tapes like this one. Norway’s THE UPTIGHTS have done masterful things to the potentially stale world of shoegazing sounds, and made stark cold winters At The Worthersee Hotel sound like a comforting and terrifying experience. The vocal wails on “Geraldine” might be just a touch over the top, but total honesty is well worth an occasional cringe (a theory that applies to things far beyond the world of cassettes). Garage punk gone the way of dark synths and noise scapes born out of disconcerting distortion…perhaps this cassette is a perfect accident, or perhaps THE UPTIGHTS are your favorite band.

Øystein D.S. (Youth Pictures of Florence Henderson)
CMJ: Scene Report: Youth Pictures Of Florence Henderson On Oslo, Norway
The Uptights have both legs and arms placed in a saturated pool of tape hiss and noise, but underneath is a great sense of melody. Self-described as three not-so-young boys adhering to a strict dress code and a lo-fi approach to music, they record directly to cassette in their tiny rehearsal space and embrace the “limitations” of the format in full (but not in the early Wavves gimmicky kind of way (no offense to Wavves)). Their first release (currently working on their second), the tape At The Wörthersee Hotel, sounds like a mixture of modern no wave sprinkled with bits of ’90s emo and switches between full-blown rock-outs to soft acoustic noodles.

The Needle Drop
I find this latest album from the Uptights kind of alluring. It doesn’t just sound like a band with a crummy recording. Rather, it sounds like these guys have an appreciation for noise, soundscapes, and drones–as well as rock and pop, of course. A lot of the songs are short of breath, but they last long enough to remind me of albums in a similar vein. Women’s self-titled debut is definitely one that comes to mind.

The Up-Turn
8th place, best releases of 2011 (PK’s list)
At just over 20 minutes, At the Wörthersee Hotel is the shortest album on this list and its brevity is what makes it such a strong listen. Taking influence from more recent lo-fi bands and 80s punk-rock, The Uptights have an infectious style that is hard to stop listening to. Through the album’s course, the band blows through punk tracks like «Norris Wallpaper Inc» and pop tunes like «Hairdresser» in under two-minutes each while still managing to make some of my favorite tracks from this year. I also give credit to The Uptights for releasing the only album on my top 10 which I don’t know how to properly pronounce.

Built On A Weak Spot
«It happens to be a pretty nifty little cassette. The band brings together a nice pallet of sounds here to experiment with their offering of lo-fi post-punk, ranging from flat out noise to soothing drones at times. While the distant and echoing melodies seem to create a bit of a dreariness to their sound, they also successfully hit upon something that sounds classic in a way, triggering a sense of heavy nostalgia. It’s an element that is far too often forced with music of this nature and its good to hear a band like this that can so successfully make the sounds of the past seem so haunting. »

Rockfreaks.net (7/10)
«This trio from Oslo, Norway, are throwing the listener back to the days of extremely lo-fi indie music, but they do so with a lot of sincerity, and that’s ultimately why “At The Wörthersee Hotel” works. It’s endearing enough to be enjoyable to listen to, and it’s just the right amount of unclear that keeps you coming back for more. It’s noisy, reckless, needlessly obscure, but that’s the fun!»